From humble beginnings in the reserve squad, young Viettel midfielder Nguyễn Hoàng Đức has grown to be a key cog in the Vietnamese national team. Winning the Vietnamese Golden Ball 2021 shows the tireless efforts of the 23-year-old footballer. 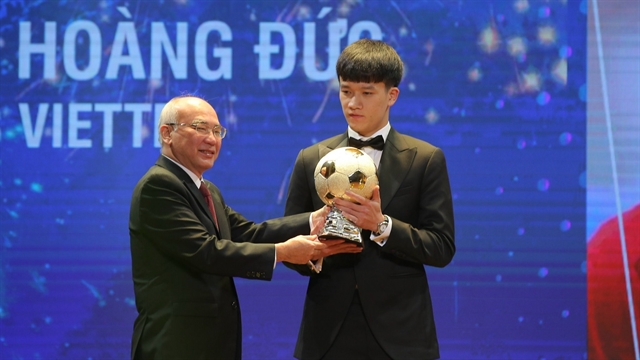 After hoisting the award at a gala night in HCM City on Wednesday, Đức said he wishes to challenge himself by playing abroad.

“The award is a great motivation for me to play and devote more to my club and the national team. In the near future, I hope to have the opportunity to go abroad, to show the ability of Vietnamese players,” said Đức.

With 466 points, Đức took the award for the first time. Midfielder Nguyễn Quang Hải and striker Nguyễn Tiến Linh were in second and third positions with 372 and 205 points, respectively.

Đức has had a superb year. He made a big impression when he first played for Việt Nam in a 2-1 victory over Malaysia in the second qualifying round of the 2022 World Cup.

He stepped in for midfielder Đỗ Hùng Dũng, who was absent due to injury.

Now, he is an indispensable asset for coach Park Hang-seo in the third qualifying round for the World Cup.

“This is really a great honour in my career. I would like to thank Viettel Group and Club, who gave me a chance to become a player and develop. I thank the Việt Nam Football Federation and the national team, who have always created conditions for me, as well as my teammates, to play the best. I thank my parents for always being my solid support in pursuing my career.

“I thank the players at the club and national team for always accompanying me towards success. Moreover, I thank the fans who always encourage me and the teams,” Đức added. 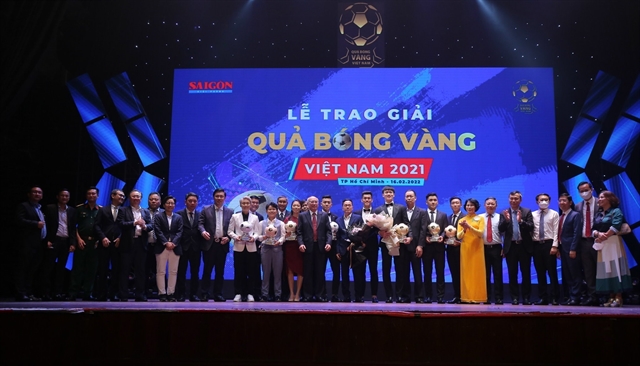 Since joining Viettel FC in 2017, Đức has become an indispensable pillar in the midfield of the military team. In the National First Division Tournament in 2018, he played in 17 matches, scoring nine goals and providing three assists, helping Viettel secure promotion to play in the national premier league in 2019. For his performance, Đức won the tournament’s best player award.

In 2020, the Hải Dương Province-native helped his team win the V.League 1, and finish second in the National Cup.

Although the V.League 1 2021 was cancelled due to the pandemic, Đức still left his mark in the league with a super goal against Topenland Bình Định, to help his team to victory in chasing Hoàng Anh Gia Lai in the rankings.

In the AFC Champions League 2021, Đức played all six matches and scored one goal.

Although Đức is rather young, his playing style is calm, cool and surprisingly effective.

Commentator Vũ Quang Huy said: “Đức impresses with his outstanding progress. 2021 is his year and he deserves to get the Vietnamese Golden Ball Award.”

Expert Phan Anh Tú said: “Đức’s effective way of playing is not available to all Vietnamese players. His dedication is recognised, and he certainly makes more progress.”

After the award ceremony, Đức returned to Viettel Club to prepare for the opening match with Bình Định in V.League 1 2022 on February 25.

In other news, in the women’s category, striker Cù Thị Huỳnh Như won the Golden Ball Award. She received 554 points, far ahead of the other two nominees, Phạm Hải Yến (201 points) and Nguyễn Thị Bích Thùy (140 points). This is the third time in a row Như has been given this honour.

Assistant Kim Chi, a silent hero in the journey to World Cup